Most marketers and salespeople today recognize the role social media plays in the modern customer lifecycle, even if it’s not part of their current franchise development strategy.

We know consumers use social channels to gather recommendations, vet competitors, and get to know your brand.

And it doesn’t stop once a lead becomes your customer:

Your existing customers leverage social media to engage with your support team, voice concerns, and promote your product.

And if you think social media is a passing trend or a way salespeople waste valuable selling time, the proof is in the pudding:

78 percent of salespeople who use social media to sell outperform their peers that do not.

If that’s not enough, consider that social sellers attract 45 percent more opportunities and are also 51 percent more likely to hit their quotas.

So clearly, social selling works. But despite that effectiveness, franchisors haven’t been quick to jump onboard with the concept.

And frankly, that’s a huge miss. So, that’s why I put together this post:

To show you exactly why social media needs to be a big part of your franchise development strategy and give you some tips on how to get started.

But, before we can dive into the future of franchise development, let’s take a quick look at how franchisors sell today.

For most franchisors, portals are still a big part of their franchise development strategy.

And I’ll admit, some portals will drive a ton of leads to your business. But, the problem comes when actually converting those leads into new franchisees.

A study from FPG found that portals were 300 percent less effective in converting new franchisees than non-portal lead sources.

Franchisors that haven’t adapted to modern selling techniques like social media are behind the curve and need to evolve.

And as a result, franchisors are missing out on big opportunities at a time when competition is steep.

With the number of franchise opportunities continuing to grow and as few as 13,000 new franchisees entering the market each year, franchisors can’t afford to have leads turn to a competitor.

And by plugging a significant portion of your budget and attention into portals, you’re missing out on some of the early-stage lead generation efforts that can set you apart from other franchisors.

Check out this funnel from Franchising.com: 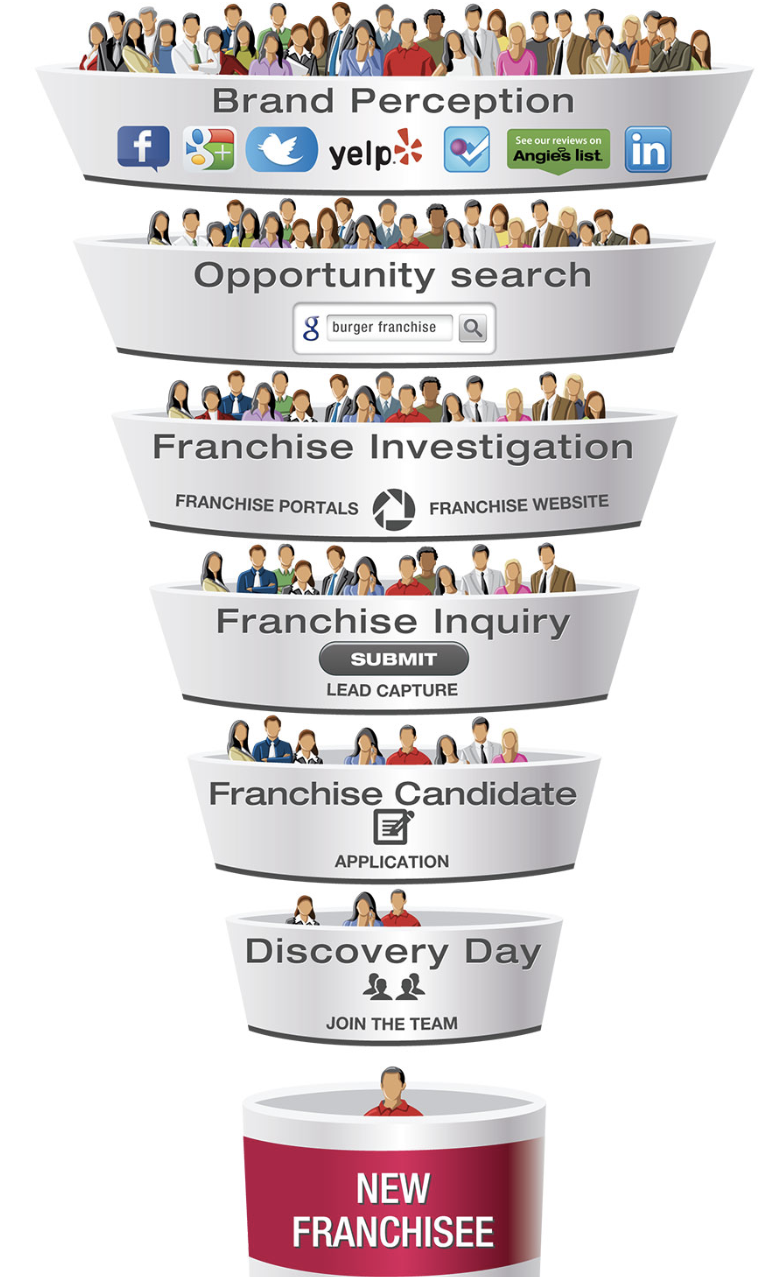 Most franchisors focus their time and money on that third stage — franchise investigation.

When in reality, it’s further up in the funnel where you have an opportunity to establish relationships with prospective franchisees.

Today, leads conduct 67 percent of the buyer’s journey digitally before connecting with a sales representative.

That means for many franchisors, your first communication with leads comes when they’re already two-thirds of the way through the decision-making process.

Ultimately, that creates friction between what candidates want from franchise salespeople and what they actually get. Joe Matthews from Franchise Performance Group highlights the problem on the FPG blog:

“Because candidates know they are being sold rather than being assisted, they often put up walls, create resistance, and eye the recruiter with caution. These franchise salespeople simply have not kept up with changing buying behaviors and haven’t made the tactical shifts required to stay current. Many don’t know how to guide a candidate down a facilitated, candidate-centric investigation process. They only know how to run a franchisor-centric sales process — the exact opposite of what the candidate wants — creating credibility issues and diminished results.”

Joe’s really onto something there.

According to IDC, 84 percent of C-level executives leverage social media in making a buying decision.

And as mentioned at the start of the article, that’s having an impact on every stage of the selling process.

Here’s a cool breakdown (courtesy of coldsalesprospecting.com) of how social selling offers better alternatives than traditional sales at various stages of the customer journey:

And here’s how franchisors specifically can make the most of social channels to improve your franchise development strategy:

I’ll admit, “brand awareness” is a bit of an ambiguous buzz term.

Of course we want prospective franchisees to know who we are and what we offer. But, it’s hard to separate that from the consumer side of the business.

And that’s where social selling helps you take a strategic turn for the better.

Social selling isn’t about separating your consumer brand from your franchise business. In fact, the two should co-exist. Ashley Betzendahl with IFA explains why on their blog:

“Consumers are often also franchise prospects; sometimes they do not yet know it. To attract those customers who also fall within a prospective franchisee demographic, it is important to determine the social platforms where they are interacting, and incorporate franchise development messaging. Because customers can also be prospects, a development presence separate from a consumer presence is not always necessary. Consumers can and will become franchisees; make them aware of the opportunities.”

It’s part of the reason brands with a killer social media presence — like Taco Bell — have grown their franchises exponentially over the last few years.

But, social selling isn’t just about helping prospective franchisees learn about you.

It’s also about you learning as much as possible about them, too.

Social media is about more than sending funny tweets or posting thought leadership to LinkedIn.

It’s about collecting critical information about your audience that you can use to better refine your entire franchise development strategy.

Nicole Hudson with Inbound Lead Solutions explains how on the IFA blog:

“Social media has fostered an environment where our target buyers, prospects and customers are actually publicly providing information about themselves in real time. These behaviors can give us key indicators of financial stability or personality traits that can also be deciphered from online activity, and social media offers development professionals the ability to engage with future franchise owners directly without picking up the phone or interrupting the daily lives of prospective franchisees.”

In other words: investing in social selling isn’t just about meeting your audience on their home turf.

3. Listen and Respond in Real-Time.

As I highlighted in my previous post on real-time communication in your franchise development strategy, the ability to rapidly respond to customer inquiries can make a huge difference in your sales process.

Live chat plays an important role in that. But, chat tools still only target potential franchisees who reached your website.

On the other hand, social media gives you the opportunity to engage with prospects at the earliest stages of the customer journey. Social tools like Quora give franchisors a chance to answer exploratory questions and share relevant content long before candidates reach your website or a salesperson. 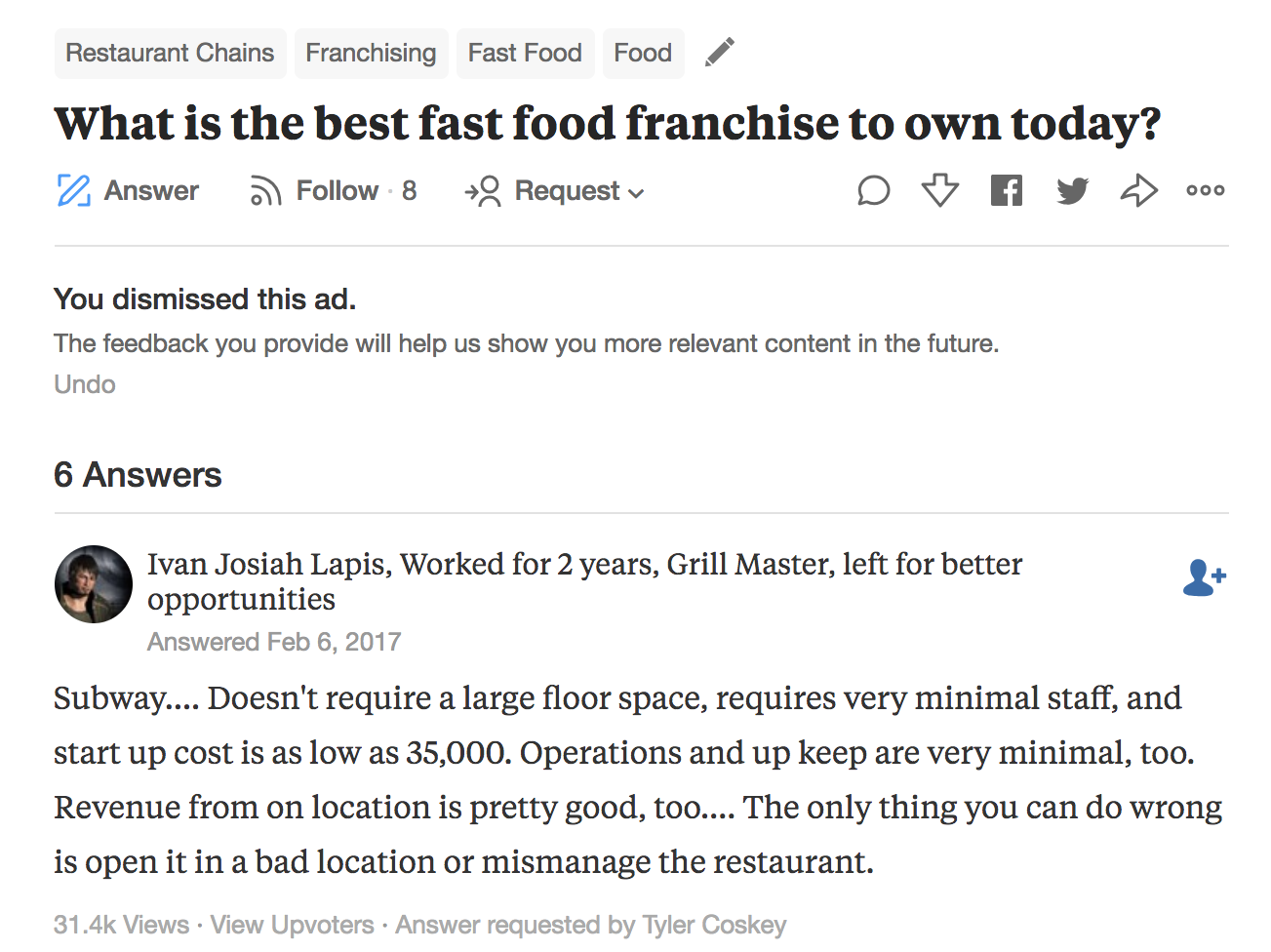 By listening and engaging with potential franchisees early-on in their buyer’s journey, you’re taking the right steps toward building a foundation of trust and thought leadership.

Whether the franchisee converts tomorrow or in five years, it’s the efforts in that early inquiry stage that sets you apart from the competition and puts you in a position for a future partnership.

It’s an essential aspect of any good franchise development strategy.

With the framework for a solid social media plan in place, franchisors can improve their conversion rates, boost brand awareness, and beat the competition for new franchisees.

Are you looking for top talent in human resources, franchising, customer experience, or higher education?

Contact us to learn more about how we can deliver the talent you need to succeed. Our systems, processes, and tools are designed to flex to the unique needs and expectations of any search.

Are you a professional looking for a new opportunity?

Contact us to discuss your career options or browse our open positions.