“If people and companies, both in public and private sectors, know the value and business impact contributed by the Latino community, why aren’t they acting on it?”

That’s the (somewhat rhetorical) question posed by Esther Aguilera as we open up a conversation about issues of equity, specifically for Latinos, in the corporate world. Finding solutions to that question is at the heart of Aguilera’s work, but it’s also something everyone should be paying attention to.

Aguilera runs the Latino Corporate Directors Association (LCDA), an organization dedicated to helping Latinos achieve equitable representation on corporate boards. Comprised of U.S. Latinos that serve on publicly traded or large privately held company boards, as well as C-level aspiring directors, the organization brings together Latinos in leadership positions who can support and elevate one another and prepare other Latino leaders to be promoted to boardrooms.

Over 400 members contribute to the organization, and that number is growing. LCDA offers two membership categories, Director and Executive, that empower Latino leaders at different levels to advance their careers and continue to help others.

Improving representation isn’t just about raw numbers, but about improving cultures and shaking off inaccurate assumptions about Latinos in the workforce, overall. Aguilera cites one study in particular that illustrates the dilemmas that Latinos face regarding whether being their most authentic selves could hinder their career progressions.

“When the study organizers interviewed Latinos, 79% felt that they couldn’t come to the workplace and be their authentic selves. They had to mold themselves and deny a part of themselves. It’s really another type of microaggression,” she explains, noting that issues like these present a problem not just for recruitment, but for retention.

“Right now, there is a battle for talent. I think more than ever, corporate culture matters, talent matters, and so recruiting and retaining should be a priority, allowing for people to bring their authentic selves.”

Latino underrepresentation on corporate boards is particularly stark given the central role they play in the American economy.

“Latinos are two in ten Americans; we are driving 70% higher GDP and market share growth than any other group. We’re such a vital part of the economy. There are 60 million Latinos in our country, and we’re growing by about a million a year. Latinos are driving business formation at a higher rate than many other demographic groups, and this is especially true in the Latina community,” Aguilera says.

Despite this, Latinos hold only 2.2% of the board seats on publicly traded companies. In 2019, LCDA’s analysis revealed that a whopping 76.8% of the Fortune 1000 companies did not have a Latino on their board. Overall, Latinos occupied only 2.7% of Fortune 1000 board seats. It’s not just about actual representation: there are still significant hurdles in perception of the Latino community.

“Americans believe that over 30% of Latinos are undocumented, and that perception is far from reality,” says Aguilera. “And they also think that our numbers of citizens are very small, in general. The reality is that 80% of U.S. Latinos are citizens, and close to 90% are citizens [and] legal permanent residents. So, these perceptions have a lot of impact on direct and unconscious bias.”

Aguilera notes that even absence can function as an issue of equity. She recalled one conversation with the organizer of a professional women’s conference. Though they didn’t have any Latina speakers, they asked for support. Aguilera responded with a polite no.

“We can’t promote conferences that don’t have any Latina speakers featured or a director’s event that doesn’t have Latinas in there. That perpetuates this perception that Latinos aren’t qualified, or you can’t find them for that panel.”

Combatting these exclusions is another part of the work that LCDA does. Their advocacy and networking work includes putting together industry profiles, facilitating networking, and advocating for their members, putting to rest once and for all the myth that organizations simply “can’t find” Latino leadership talent.

The pursuit of equity requires paying attention to these issues, not sweeping them under the rug or pretending that they don’t exist, giving room for bad actors to negatively affect a whole corporate culture. It doesn’t just affect DEI initiatives—it can affect results across the board.

“When there is a blind eye to bad actors, people who don’t give respect, or you have those microaggressions, it affects corporate culture; it affects that team’s performance. Too often, they’re given a pass, yet they’re infecting the entire team and the culture, so you’re not getting the performance you need,” Aguilera points out.

So what is the solution? According to Aguilera, companies need to commit to actual change and honesty, starting at the top and going through the whole culture.

The LCDA continues to make big moves to support and promote Latino leaders. They partnered with the Latino Corporate Directors Education Foundation (LCDEF) to create the Board-Ready Institute (BRI). Aspiring directors can take advantage of premium learning through participation in a comprehensive board readiness program, preparing and positioning Latino senior executives for corporate board service. As part of the program, participants will join LCDA as Executive Members, too.

It’s just one of many ways LCDA is working towards authentic, fair Latino representation. For the companies themselves, Aguilera has a simple message about how they can participate in real change.
“Handle the things that can make your employees feel proud and want to come to work every day, rather than feeling like they’re harassed, or not appreciated, and not heard, and can’t be authentic.” When this happens, we all win. 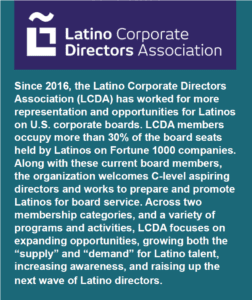